Sound Voltex is a rhythm game that originated in Japan. It mixes the standard top down four column layout of other rhythm games along with two additional columns which overlap on columns 1/2 and columns 3/4. It also incorporates two effects sliders which cross the playing field. Sound Voltex arcade machines are playable in Japan and in the United States through Round1. A PC application available for most countries as Sound Voltex III e-AMUSEMENT CLOUD.

K-Shoot Mania is the main alternative to SDVX and is free to play and supports a wide variety of input control schemes. The K-Shoot Mania Project can be found here.

Before you decide to build your own controller, it may be worthwhile comparing existing options. Building your controller is a rewarding experience but will often cost as much or more than commercial controllers, especially if you don’t already have access to the necessary tools.

One of the biggest obstacles to actually building the controller is having access to the necessary equipment. If you don’t have access to the equipment at home or at a university, check to see if there’s a hacker space nearby which might have the equipment you need.

For most builds, I would recommend using Chinese clones over official Sanwa parts due to the steep cost of Sanwa parts. The parts which affect gameplay performance the most are the limit switches and the optical rotary encoders.

Arcade buttons will usually ship as a preassembled unit containing the arcade button, limit switch, LED lamp holder, LED fixture and LED. These arcade buttons typically come with really heavy return springs (100g - 150g) and heavy limit switches (100g - 200g). Using both of the default parts will probably be too heavy to play difficult songs with and I would recommend using either of the three following configurations.

This chart displays the weight of the individual parts of the button which the switch must act against and the minimum force buffer that you must maintain for correct operation. The actuation force is roughly the summation of the return spring and the actuation force of the limit switch. The minimum actuation force required is a suggestion however choosing a lower actuation force will result in buttons which return slowly creating a sluggish feel.

Official Sound Voltex Arcade machines do not have a universal weighting for the buttons and often vary between arcades.

For the box design, we will use a layout that was originally sourced from sdvx.pancakeapps.io. Unfortunately, I have only designed boxes for use with laser cutters and if you are building a box without precision equipment, you will have to design your box from scratch.

If you have access to a laser cutter, I have created design files for two types of boxes. The standard design uses 1/4” thick medium density fiberboard for the box and uses finger joints to maintain structural integrity. The other design has a clear acrylic sheet on the top and has a MDF plate underneath it which allows for underglow lighting. This tutorial will uses the standard design without LED lighting.

MDF was used as the main material for the standard design due to its strength, low cost and ease of painting. MDF however is a fairly dense wood and takes many passes with a laser cutter (8 passes in my case) and can be substituted for a different type of wood. Acrylic can also be substituted for MDF however, make sure you do not use polycarbonate as polycarbonate will create toxic gasses when laser cut. 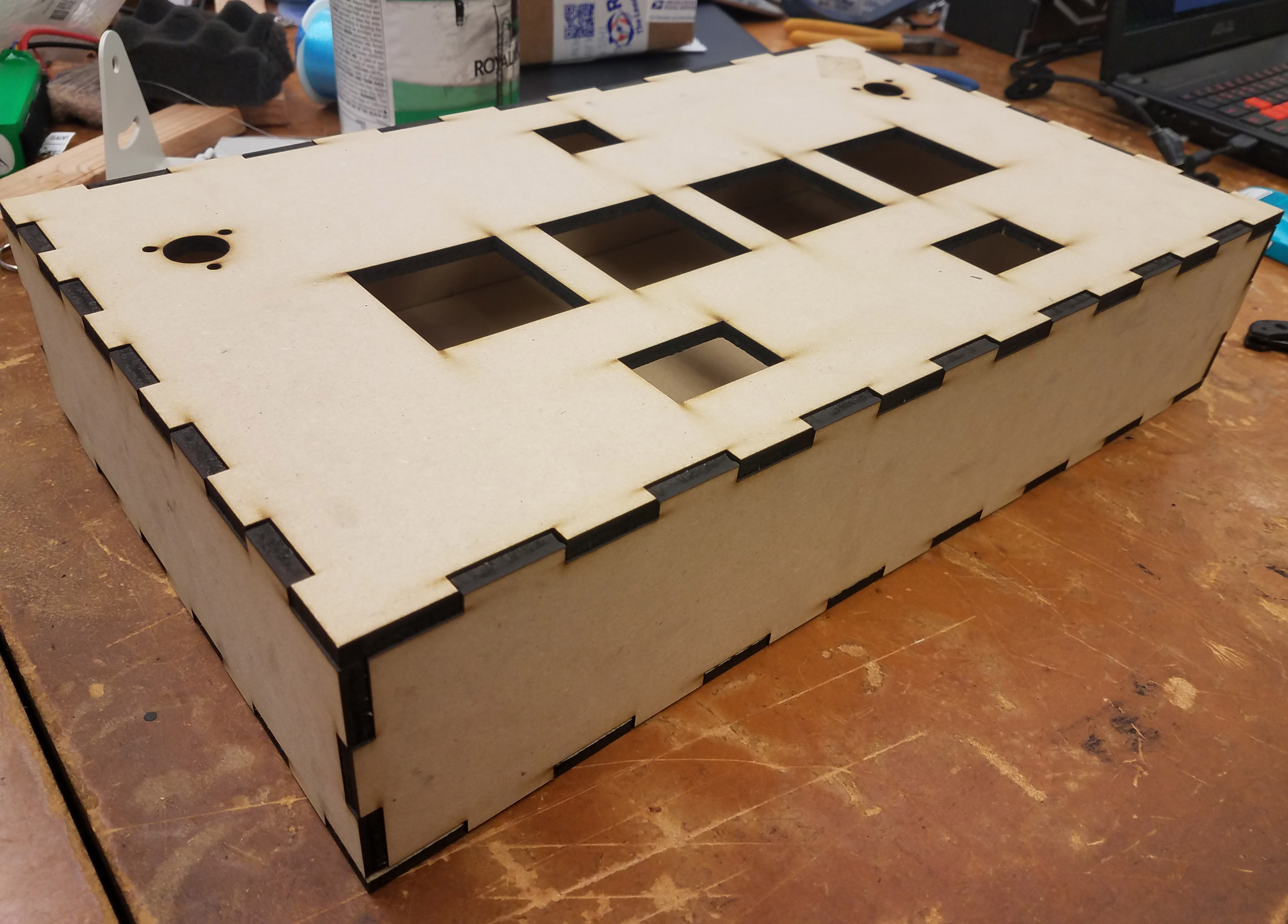 Although the design was laser cut with finger joints, due to the variance of the size of the laser between laser cutters, it is unlikely that the panels will friction fit. To hold the panels together, we will glue to the side panels and the bottom panel together. Silicone or epoxy is recommended as it is strong and allows for some adjustment as it cures. Both types of glue will typically take at least 24 hours to cure. Use painters tape or fishing wire to hold the panels together while the glue cures. 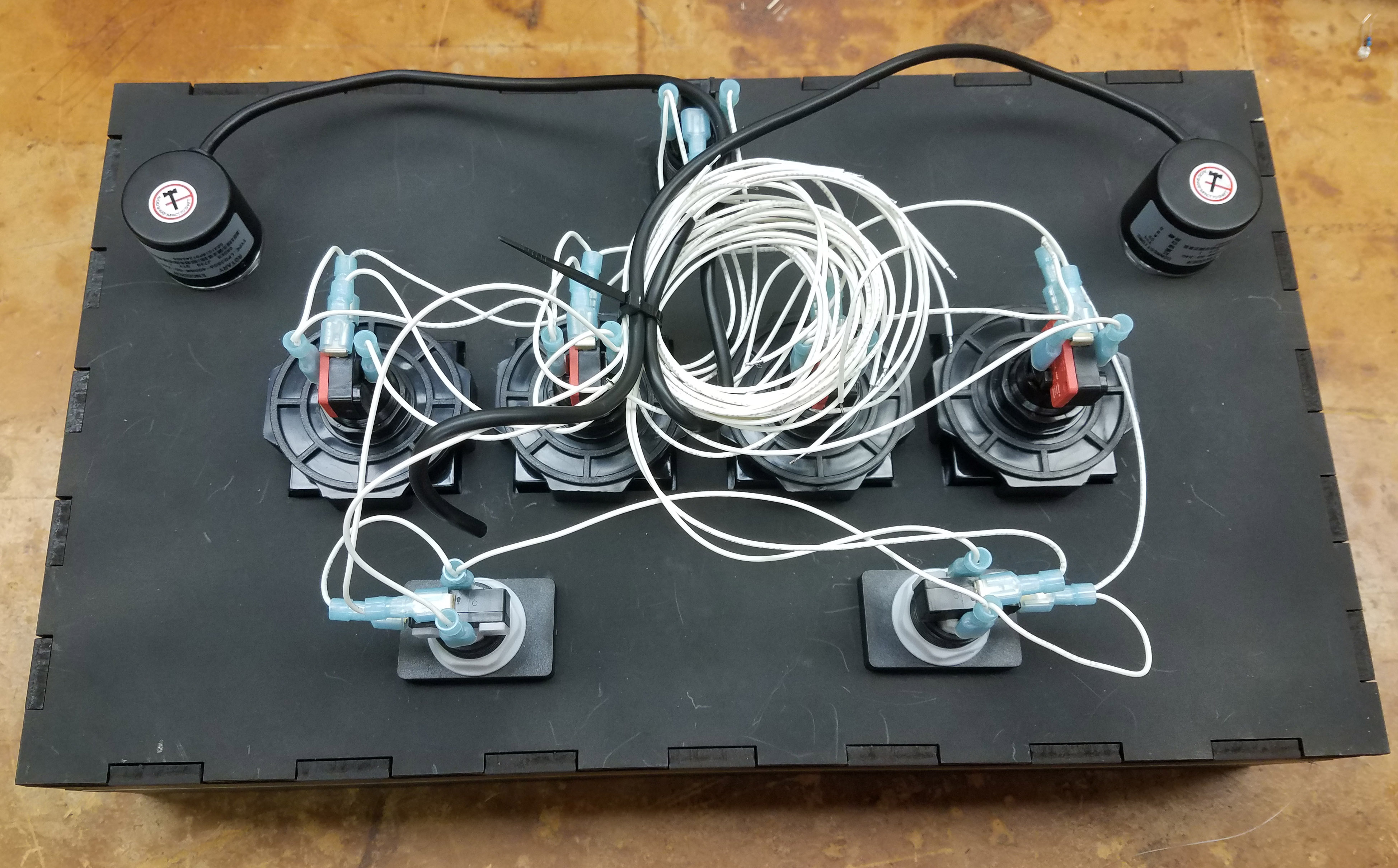 Top Plate Placed on Box to Set Alignment While Curing

The arcade buttons consists of eight main parts, the housing, plunger, plate mount, fastener, LED lamp, lamp holder, return spring and limit switch. An layout of the different parts can be found below. 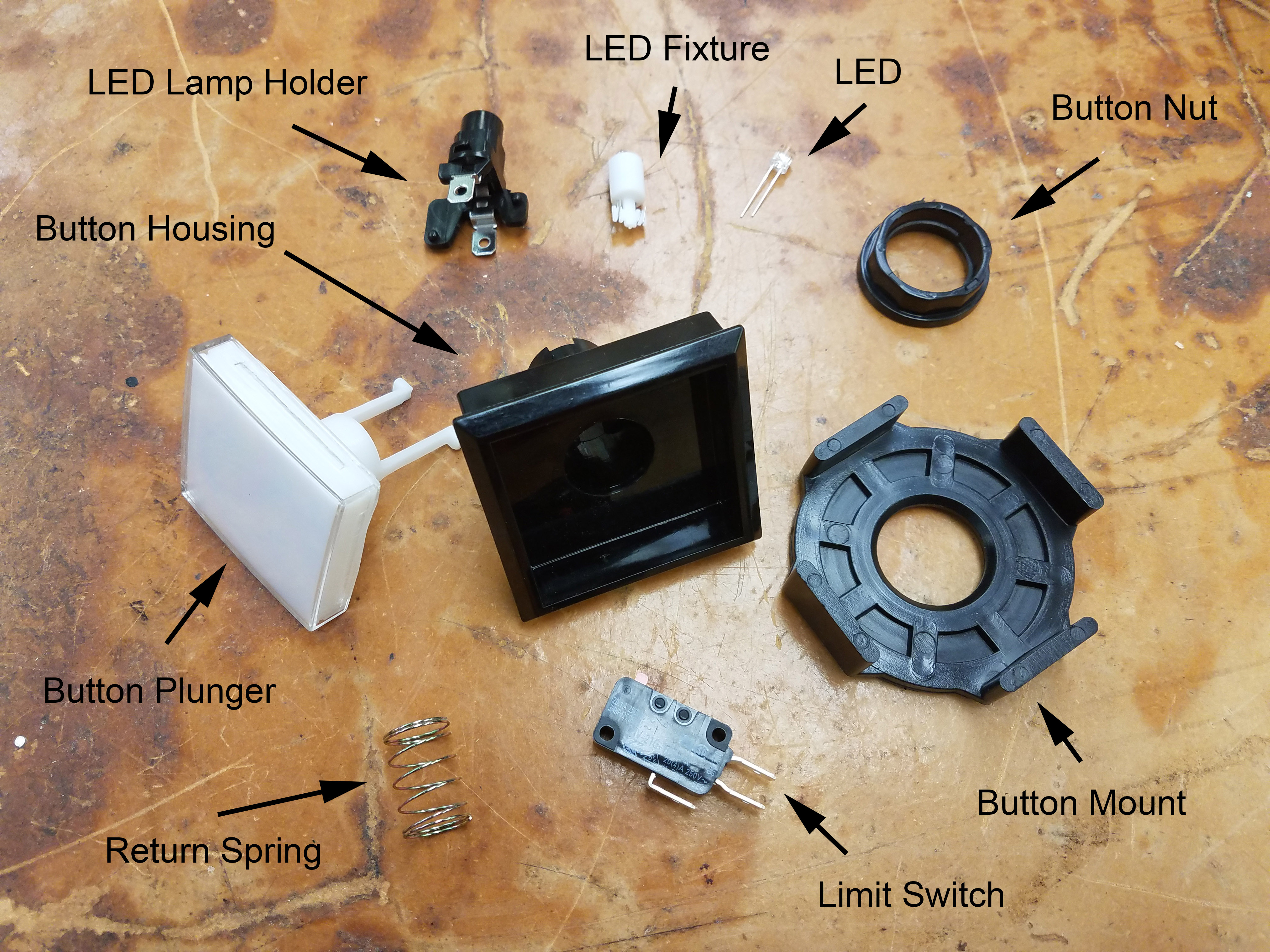 Arcade buttons usually ship with a lamp holder, LED fixture and LED. The LED will either be white or the same color as the button cap. Most of the LED fixtures and LEDs that ship with the arcade buttons will have a resistor soldered to the LED in the fixture. This allows the LED to be driven directly off 12V without a resistor. Since we will be driving the LED directly off the output pin of an Arduino, the LED will be dimmer than intended. The LEDs chosen for the guide are a flat topped variety which offers the best illumination pattern within the square button and can be driven directly off the 5V output pin without an external resistor. The side of the lamp which has longer leads or more wire wrapped around the bottom post is the positive side of the LED. 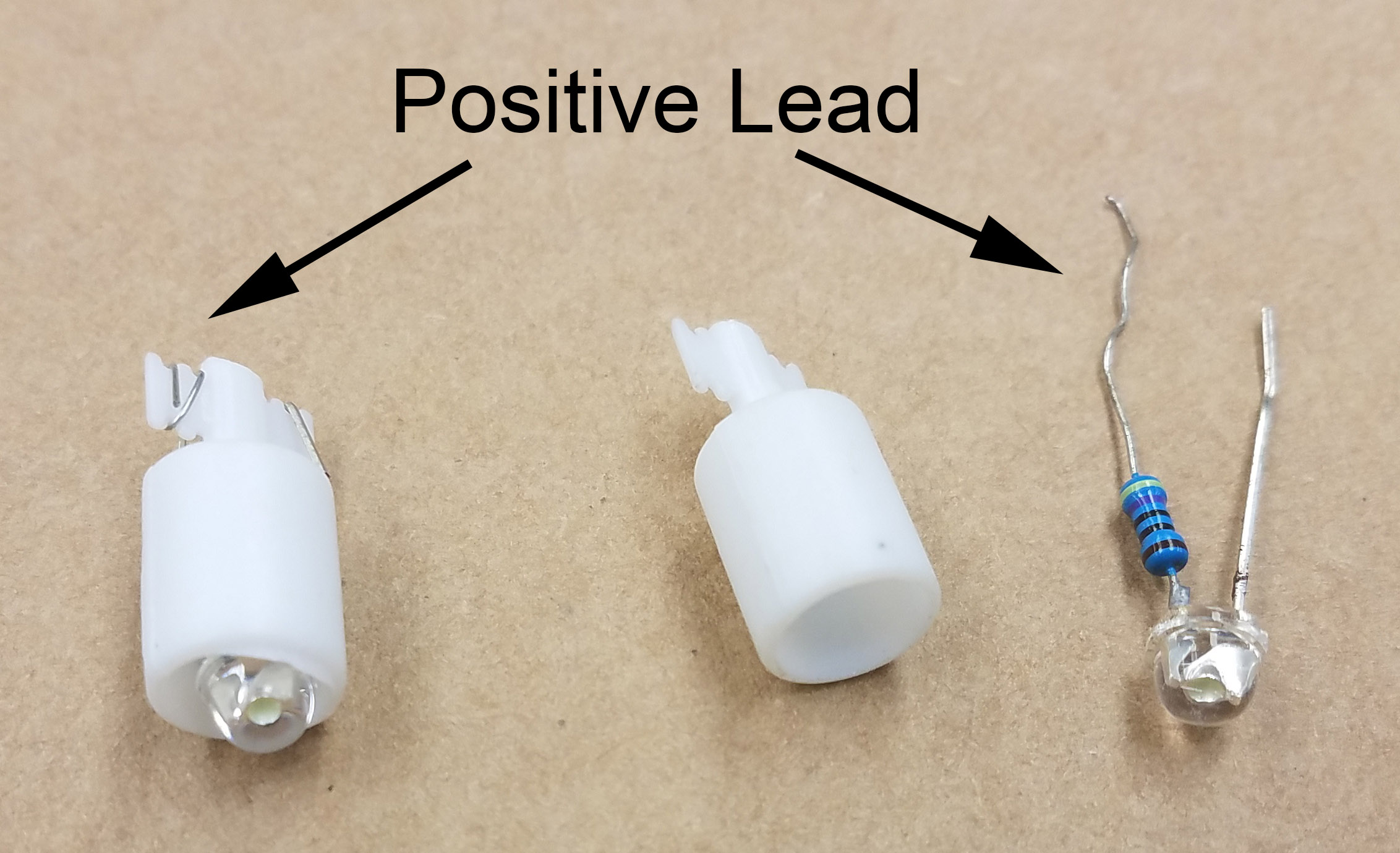 For this section, you will need 14 45cm lengths of wire, 14 spade connectors, a wire cutter, wire stripper, crimping tool and soldering iron.

Using your wire stripper, strip off about 5mm of insulation off both ends of each wire. Once all of the wires are stripped, use your soldering iron and tin both ends of the wire. The ends should be coated in a light application of solder and the individual wire strands should not separate. 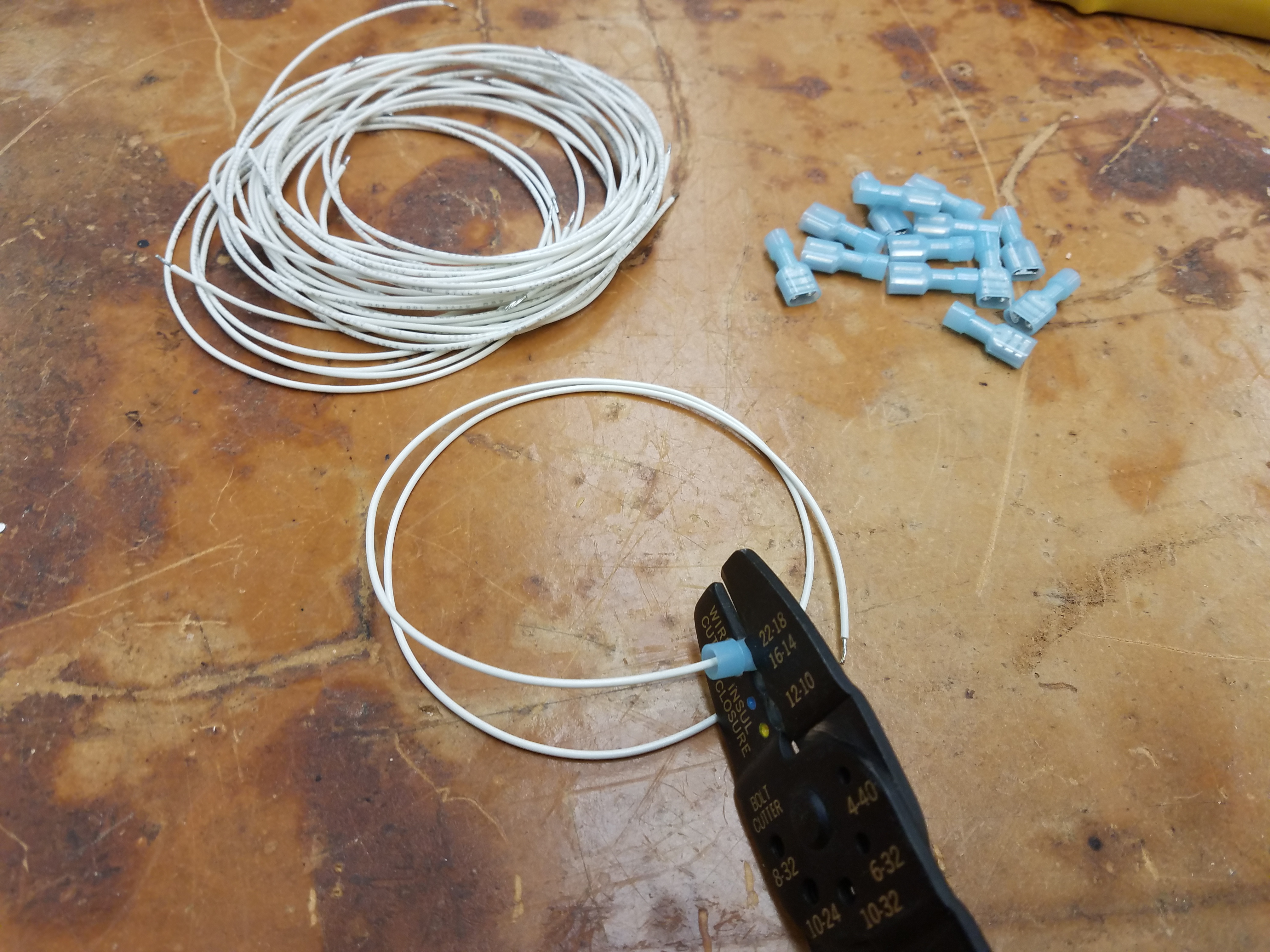 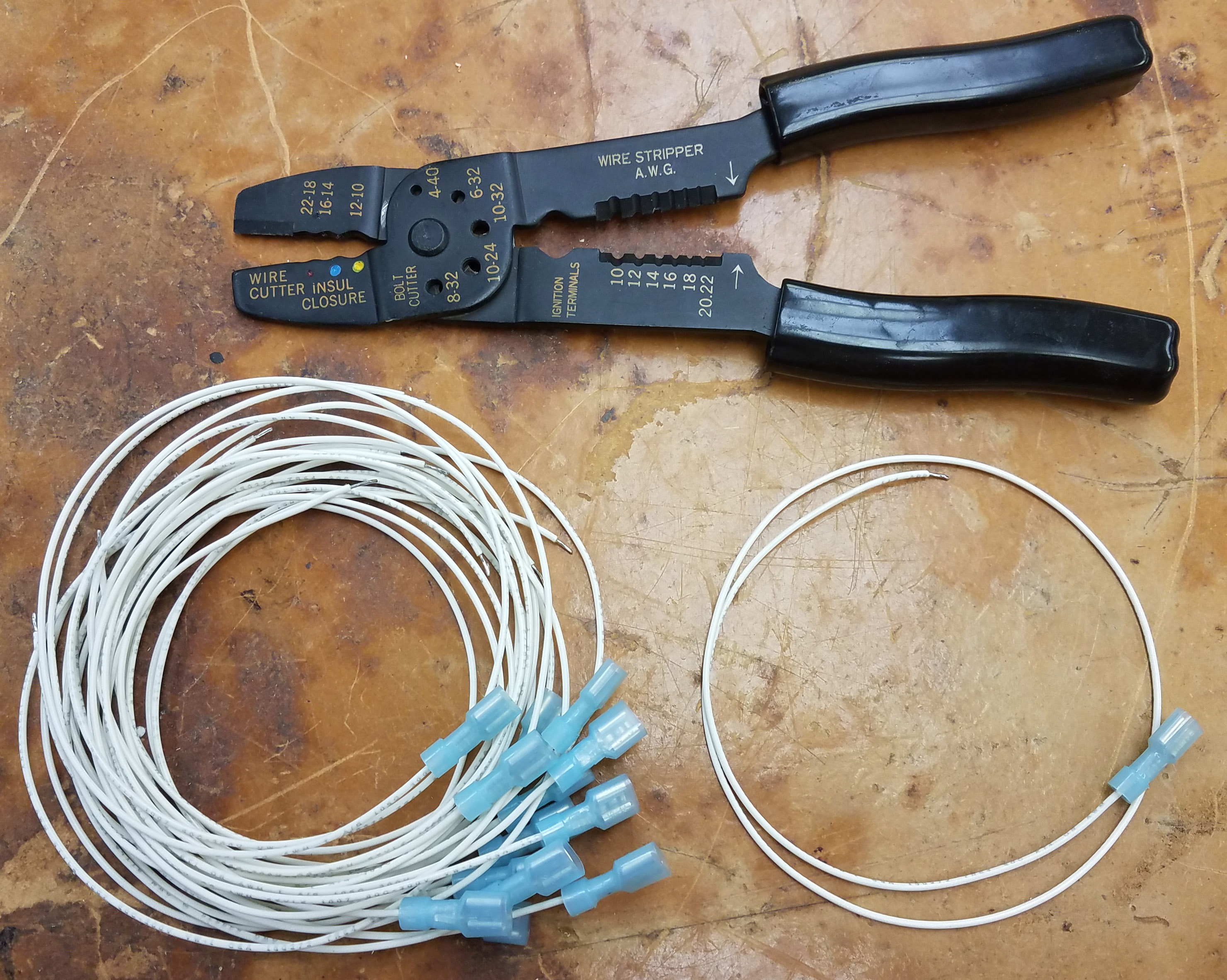 For the ground wire, we will create a single daisy chained wire (harness) to connect all of the grounds. This allows us to reduce the number of wires in the box by half.

To reduce the length of excess wire, we will measure the length of wire by measuring the space between the buttons. Unlike the signal wires, two wires will have to be soldered together first before the spade connector can be crimped. 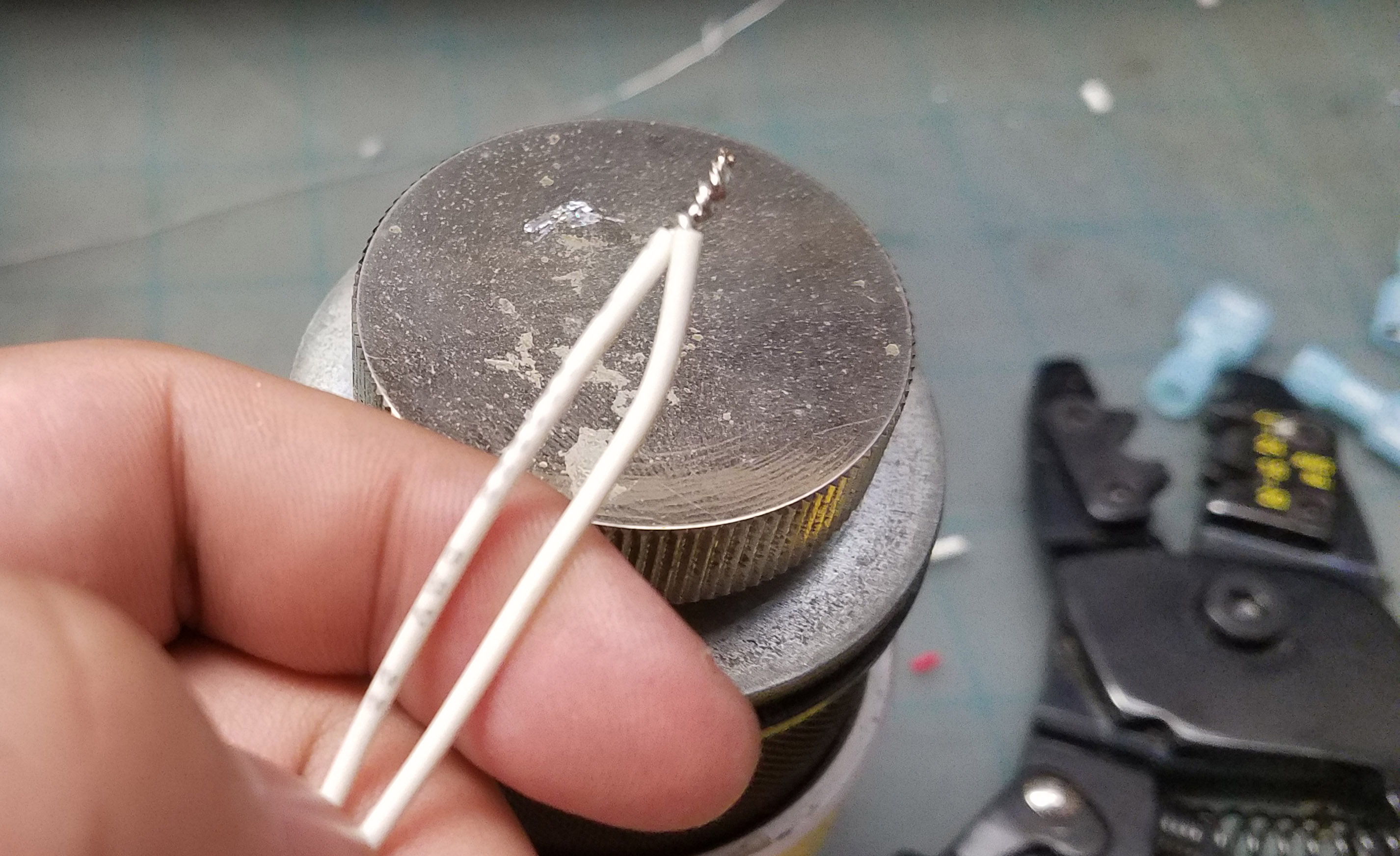 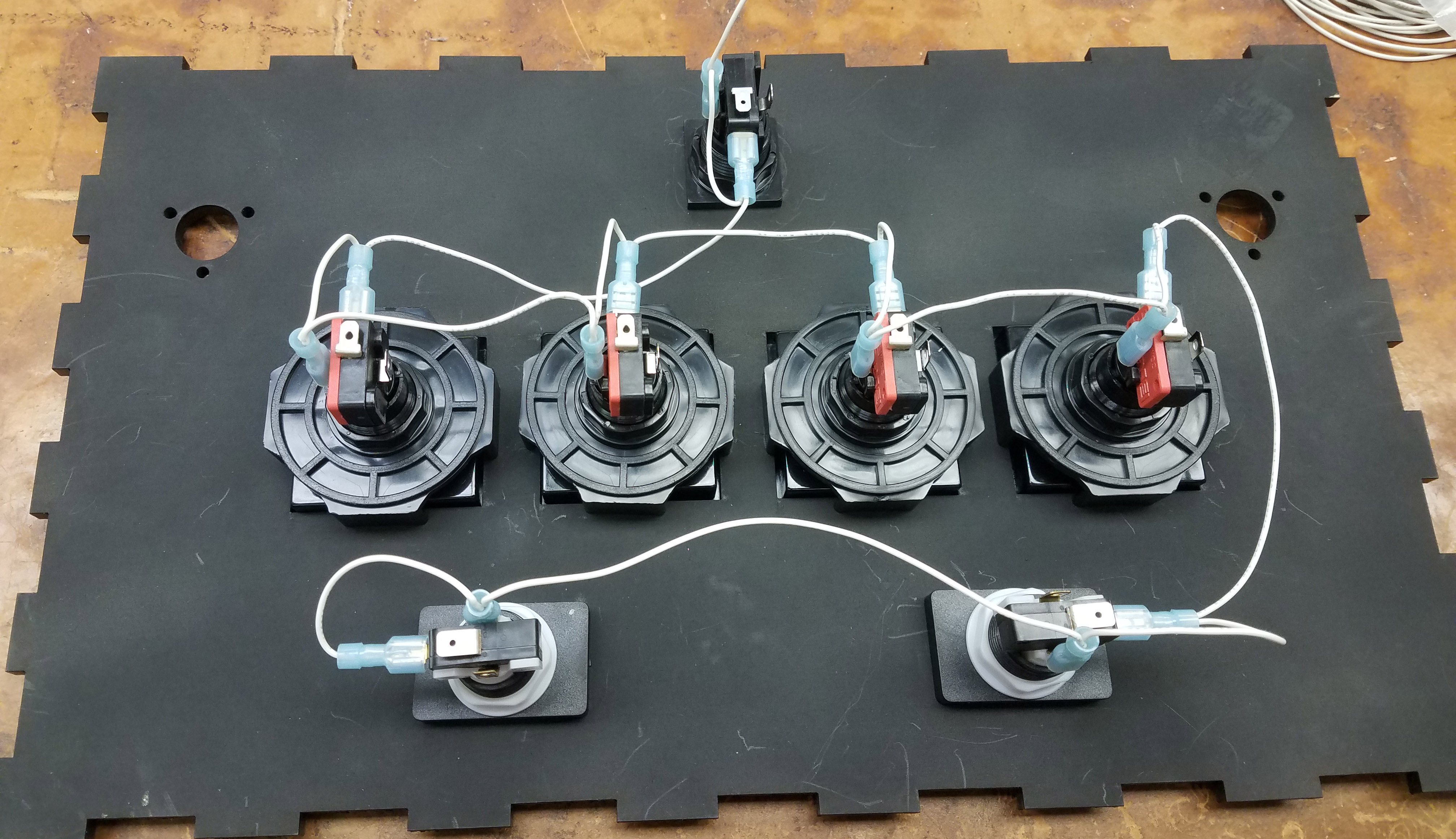 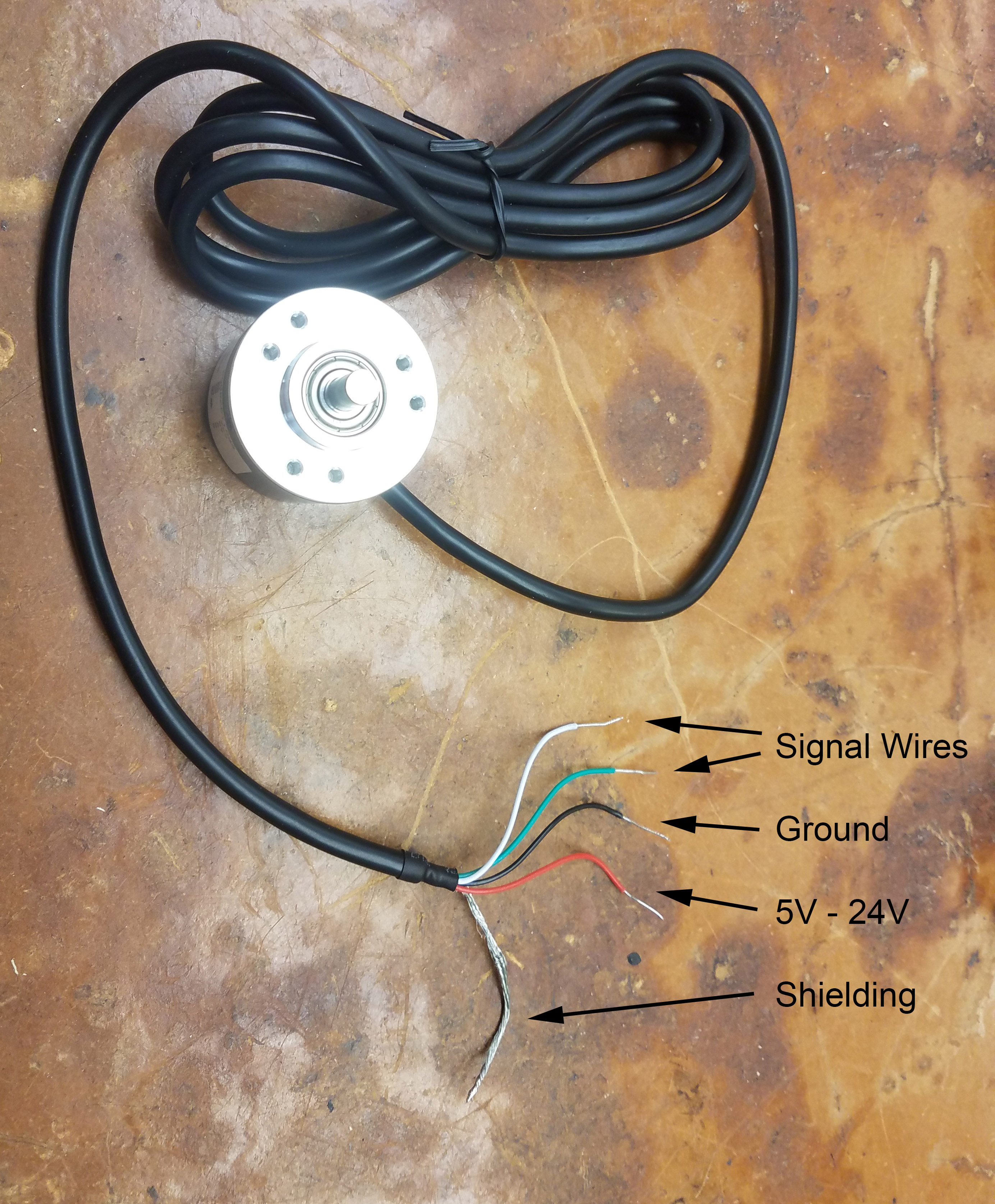 In this guide, we used an Arduino Micro with a breakout board instead of the more traditional Arduino Leonardo. While this route is slightly more expensive, the screw terminals on the breakout board are a more permanent solution than plugging wires into a pin header. 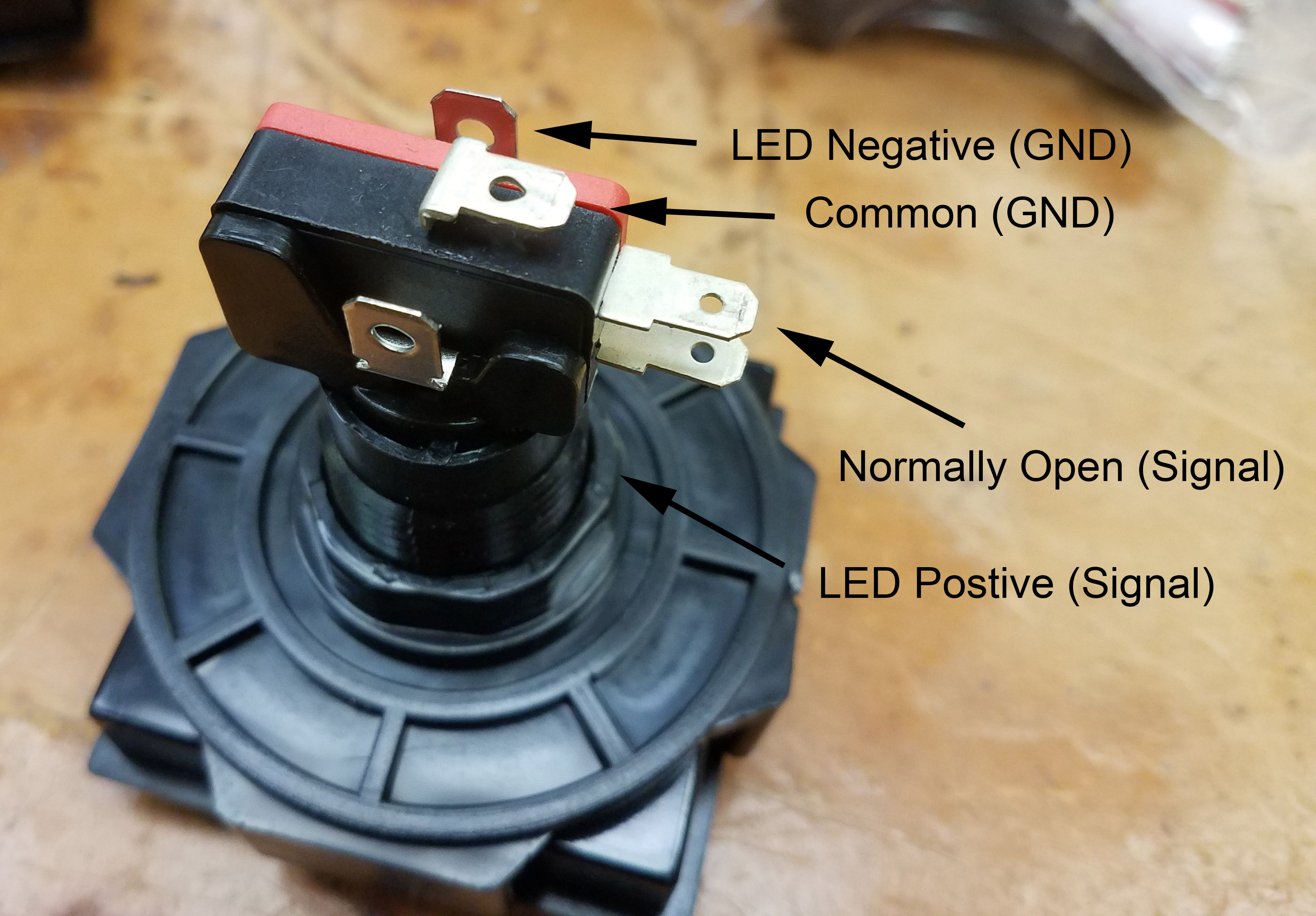 As of writing, the wiring for the buttons should be plugged into the following ports on the Arduino Micro’s breakout board.

These pin assignments can be adapted to the Arduino Leonardo or any other Keyboard & Mouse library compatible boards. Make sure encoder pins are assigned to interrupt pins if a different board is used.

In order to load the firmware onto the Arduino Micro, you will need to install the Arduino IDE. If you already have the Arduino IDE installed, make sure it is the latest version as older versions handle libraries in sketch folders differently.

The firmware code can be found in my SDVX-DIY GitHub repository. There are two main development branches, master and standard. The standard branch is the branch used for this tutorial. The master branch has SK6812 based RGB LED backlighting which is not covered in this tutorial.

To download the code, navigate to the appropriate branch and click the “Clone or download” dropdown and download as a zip file. To open the code, unzip the downloaded zip file and open the “SDVX-DIY.ino” file with the Arduino IDE.

Before you upload the code, there are several parameters within the code that can be modified in the event that different parts or wiring was used. View the GitHub readme on each branch’s respective page for further information.

To upload the code, you will first need to select the board type and COM port of your controller in the Arduino IDE. To select the board type, navigate to the “Tools” dropdown, expand the “Board:” option and select your Arduino board. If you are using a Pro Micro, select the Arduino Leonardo board. Next, on the “Tools” dropdown, expand the “Ports:” option and select your controller’s COM port. Once these settings are set, click on the arrow on the top left of the screen to upload the program. 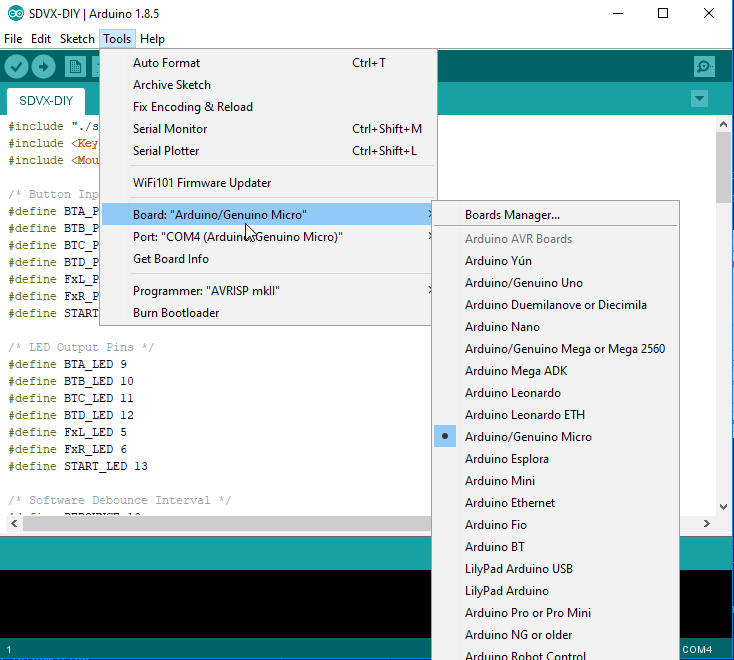 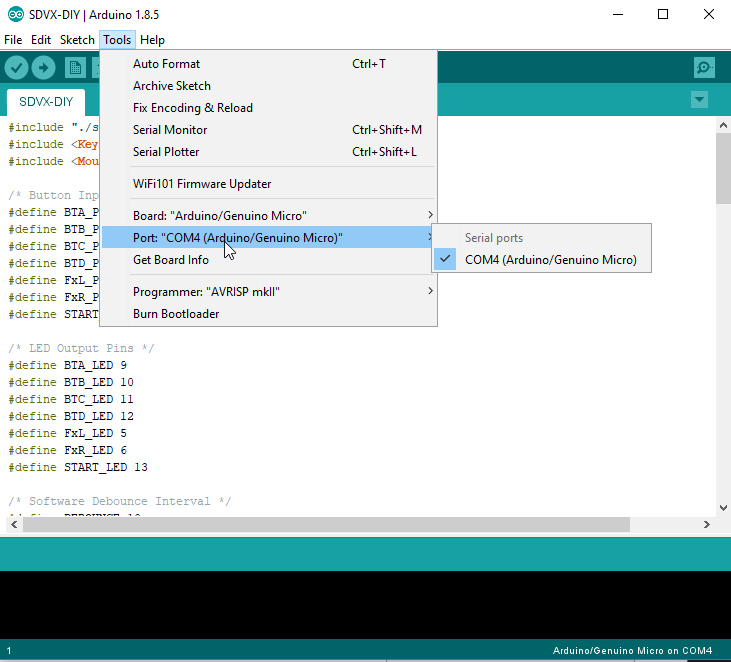 If you followed this guide and completed a controller, feel free to send it in for display.

Error out of sync when programming the Arduino:

If you’re getting this message, make sure you COM ports and board type is correct. You may need to hit the reset button as you upload the program.

If you have any questions regarding the guide or have any suggestions on how it may be improved, feel free to contact me at reyn.mukai@gmail.com